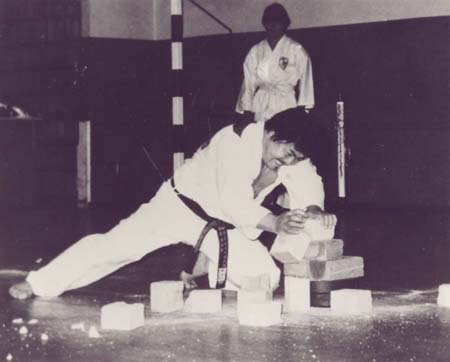 FLYING EAGLE BONG HAP KI DO ASSOCIATION OF SINGAPORE is setup Offically in Singapore during the 1982.
The Grandmaster,Tan Sar Bee Sunny, of the Association has a 9th dan in FLYING EAGLE HAPKIDO, a 8th dan in Sar Hyun Kong Moo Soo Kwan TaeKwondo and 6th star in Koong Goo Duk Wrestling.
Grandmaster Sunny Tan Sar Bee was in Korea since 1958. He had learned TaeKwonDo and had graded the highest dan. He was one of the 200 master to got the highest dan and only 42 of them got it.

There is a committee setup for this association to organise it smoothly.

There also many experience and good instructors available to teach people of who are interested and age 5 and above. There is also a branch open in Hainan Dao and there is also be a Singaporean representive there.

Flying Eagle Bong Korean Hapkido is not any other types of Hapkido which many people have learned in Korea . This art is a Military Combat Method & System as compared to other Hapkido like Sin Moo Hapkido which their main essence are towards Ho Sin Sool (Aikido style of Locks & throws).

From General Unn , the art was later taught to Grandmaster Sunny Tan Sar Bee (9th Dan). He trained with General Unn while his stay in Korea and served the Korea military sometime in 1958. In the early days, he met many Masters like Jhee Han Jae , Hwang In-Shik and etcs. He also trained together with them and had gathered much knowledge and incorporated many techniques as well. Then sometime in 1970's, he went to Choi Yong Sool whose art was known as Yu Sool at that time. He trained and lived at his school for sometime before returning back to Seoul .

After gathering all his knowledge in Korea for years, he finally makes his return to Singapore . Then in 1974, he went back to Korea again to train for his TaeKwonDo . He was already a Black Belt then. Korea held its first and one time training and grading for all the TKD instructors in the world and they are to be graded as the high ranking officially from Kukiwon . More than 200 TKD instructors around the world went for the training course and they had to live in Korea for one year. Grandmaster Sunny Tan lived & trained there and went for the test. Among the more than 200 instructors around the world, only 42 passed the grade and he was one of them and is the only Singaporean .

After Grandmaster Sunny Tan got his rank as a 4th Dan in TKD, he returns again to Singapore . He started many schools in Singapore and taught many students. In those days, he had more than 300 students alone in YMCA. Later, he went to Europe and started teaching his art there.

Sometime later in 1996, Grandmaster Sunny Tan returns to Singapore and started his schools again. This time besides the teaching of not only Flying Eagle Bong Hapkido & Sar Hyun Kong TaeKwonDo , he also teach his new found art called Kong Goo Duk Wrestling. This art was found in New Zealand and is well known in China , Holland , Malaysia and Australia .